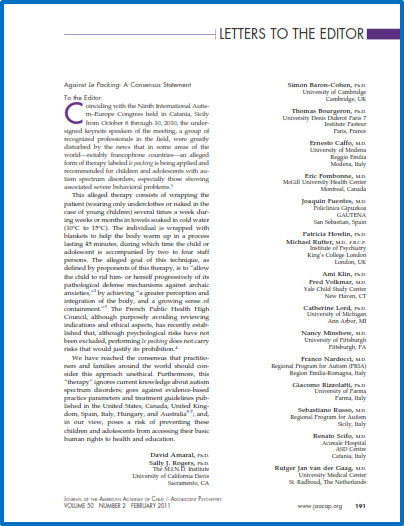 Coinciding with the Ninth International Autism–Europe Congress held in Catania, Sicily from October 8 through 10, 2010, the undersigned keynote speakers of the meeting, a group of recognized professionals in the field, were greatly disturbed by the news that in some areas of the world—notably francophone countries—an alleged form of therapy labelled le packing is being applied and recommended for children and adolescents with autism spectrum disorders, especially those showing associated severe behavioural problems.

This alleged therapy consists of wrapping the patient (wearing only underclothes or naked in the case of young children) several times a week during weeks or months in towels soaked in cold water (10°C to 15°C). The individual is wrapped with blankets to help the body warm up in a process lasting 45 minutes, during which time the child or adolescent is accompanied by two to four staff persons. The alleged goal of this technique, as defined by proponents of this therapy, is to “allow the child to rid him- or herself progressively of its pathological defence mechanisms against archaic anxieties, “by achieving “a greater perception and integration of the body, and a growing sense of containment.”

The French Public Health High Council, although purposely avoiding reviewing indications and ethical aspects, has recently established that, although psychological risks have not been excluded, performing le packing does not carry risks that would justify its prohibition.

We have reached the consensus that practitioners and families around the world should consider this approach unethical. Furthermore, this “therapy” ignores current knowledge about autism spectrum disorders; goes against evidence-based practice parameters and treatment guidelines published in the United States, Canada, United Kingdom, Spain, Italy, Hungary, and Australia; and, in our view, poses a risk of preventing these children and adolescents from accessing their basic human rights to health and education.