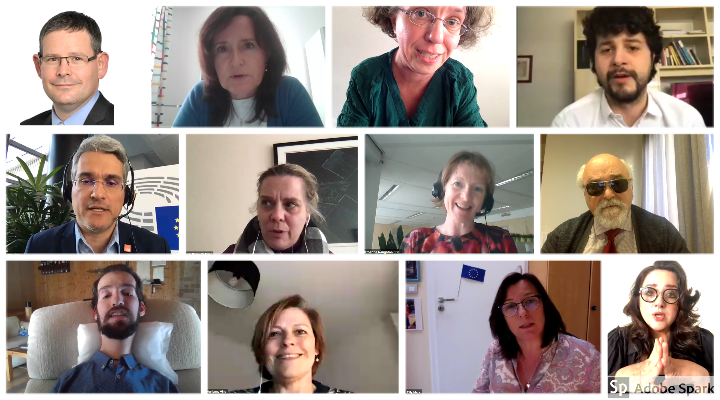 On 30th April 2020, the online Disability Intergroup meeting, organized by the European Disability Forum (EDF), brought together experts in the field, MEPS, and Commissioner Helena Dalli for a discussion on the impact of COVID-19 on persons with disabilities. All panellists called for the EU and its member-states to cater to the needs of people with disabilities during the COVID-19 health crisis as many have been disproportionally affected by it.

EDF president Yannis Vardakastanis (Greece) expressed his shock at the horrific situations disabilities communities faced across the EU, in particular those living in institutions. He called on the European Commission, European Parliament and European Council to act swiftly to protect people with disabilities. EDF’s Vice-president Ana Peláez Narváez (Spain) highlighted that people with disabilities were forgotten in the answers to the Coronavirus. EDF’s board member Luisa Bosisio Fazzi (Italy) felt that the way remote education was organized during the lockdown posed major challenges for pupils with intellectual disabilities and contributed to widening the educational gap between learners with and without disabilities.

For Commissioner Dalli, the COVID-19 health crisis is a test of the European Unions’ implementation of United Nations Convention on the Rights of People with Disabilities. She pointed to several relevant initiatives from the Commission including the Coronavirus Response Investment Initiatives which provides member-states with more flexibility in using EU funds. The European Pillar of Social Rights should also be considered a guideline for member-states during the crisis. She spoke out against persons with disabilities being institutionalized because of quarantining procedures, and stated that those who were in institutional care prior to the crisis are fully entitled to receive the care they need. She promised that the next European Strategy for people with disabilities will take into account the challenges arising from COVID-19.

MEP Anne-Sophie Pelletier (GUE/NGL, France) raised the issue of how the lockdown measures and the absence of protection could result in the suspension of rehabilitation programs and therefore place people with disabilities, physiotherapists and speech therapists in a difficult situation. MEP Radka Maxová (Renew Europe, Czech Republic) insisted on the necessity to adopt measures to protect informal carers, such as the swift implementation of the work-life balance directive. Since the majority of informal carers are women, support and recognition of informal carers would help mitigate negative impacts on gender inequality. She also enquired about the establishment of disability focal points planned within the European Commission and the Council to ensure adequate mainstreaming. MEP Stelios Kympouropoulos (EPP, Greece) emphasized that during lockdown deinstitutionalisation must continue. He echoed the demands of the disabilities communities for a European strategy on deinstitutionalisation. MEP Mónica Silvana González (S&D, Spain) would like to see more concrete points for people with disabilities in the resolution mentioned above such as guarantees to information in simple and easy to understand language as well as easy access to information.

In her answer Commissioner Dalli indicated that the equality taskforce gathers experts on equality from every Directorate-General of the European commission to ensure the equality perspective in all policy and legislation.

For MEP Katrin Langensiepen (G/EFA, Germany) the evaluation of the outgoing European Disability Strategy should also cover the experiences of the COVID-19 pandemic and appropriate measures should be proposed on the basis of systemic consultations with the disability communities. She highlighted that the adoption of the next European disability strategy should remain a priority. MEP Rosa Estaràs (EPP, Spain) proposed a temporary increase in the European Social Fundsco-financing for the areas most affected by the Coronavirus. These funds will support the social sector and aid in the employment of groups who are at risk of exclusion. MEP Chrysoula Zacharopoulou (Renew Europe, France) recalled the difficult situation of women with disabilities who face domestic violence and are more vulnerable during the lockdown measures. Member states need to put additional measures in place to ensure continued protection and provided assistance for these women. MEP Marianne Vind (S&D, Denmark) advocated for including the right to work and take active part of the labour market in the new European disability strategy. She pointed out that the labour market needs to be adapted to the needs of people with disabilities. MEP José Gusmão (GUE/NGL, Portugal) summarized the major upcoming proposals by the European Parliament. Concerning the European Disability Strategy, he urged all relevant Parliament stakeholders to press for a vote on the Strategy at the May plenary session. MEP Tilly Metz (G/EFA, Luxembourg) who closed the Intergroup meeting, recalled that the anti-discrimination directive should be adopted by the EU.