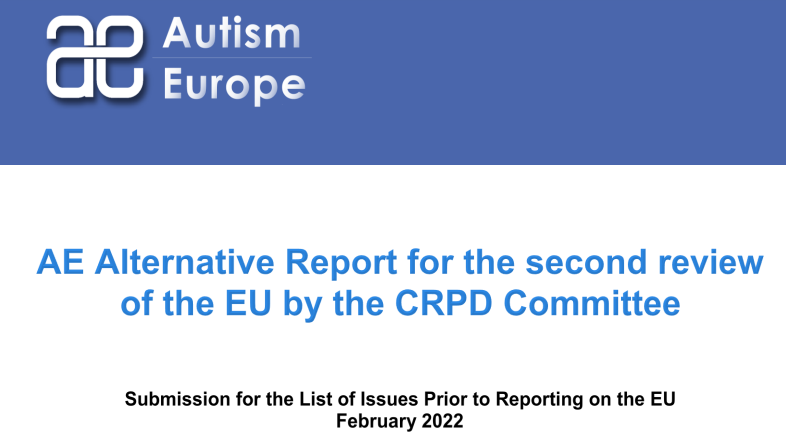 The EU ratified the UNCRPD in 2011 as the first and currently only supranational organisation worldwide. Since then the CRPD has monitored the implementation of the UNCRPD by the EU.

Delayed by practical constraints around the COVID-19 pandemic, in March 2022, the CRPD will initiate the second review of the European Union’s UNCRPD implementation. To do so the CRPD will first adopt a document called a “List of issues prior to reporting” that will ask the EU questions on how they implemented the various articles of the UNCRPD.

To inform the CRPD, Autism-Europe submitted an alternative report to the “List of issues prior to reporting” and suggested specific questions on various articles focusing on the needs of autistic people and their families based on input from our members as well as review of literature.

AE’s alternative report focuses on the most pressing issues autistic people and their families face across Europe. These issues relate to the lack of protection against discrimination in many fields of life, including in relation to access to social protection, healthcare/rehabilitation, education, etc. notably due to the lack of horizontal antidiscrimination legislation at the EU-level.

Autistic people also often struggle to enjoy their EU rights due to lack of mutual recognition/ harmonization of autism diagnosis and disability status together with the lack of portability of disability benefits that impede their freedom of movement across the EU.

The report also highlights the specific needs of women and children on the spectrum. Other issues addressed are the limited scope of the European accessibility Act, challenges linked to access to justice and the denial of legal capacity still faced by autistic people in many EU countries as well as EU funds being used to foster segregation.

AE report intends to complement the alternative report by the European Disability Forum to which Autism-Europe gave input, which can be found here.

For this report, Autism-Europe consulted extensively with its member organisations. After a training delivered by EDF staff to members of Autism-Europe’s Council of Administration during its meeting in November 2019, which can be found here, a workshop on the priorities of autistic people and their families for the alternative report was held during the Council of Administration meeting in November 2020.