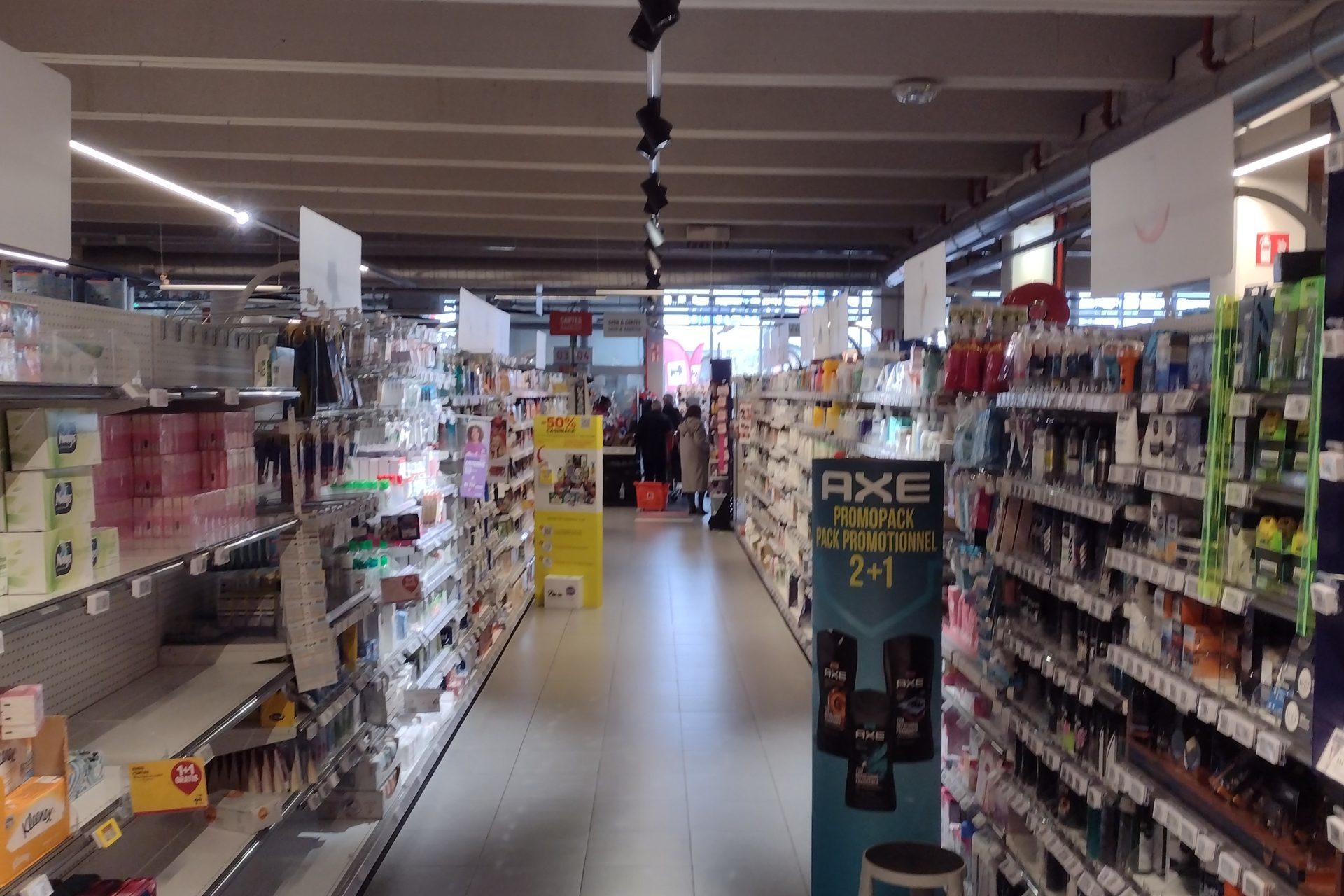 This week Carrefour introduced “silent hours” to make most of their stores in Belgium sensory-friendly for people with sensory processing issues. Delhaize follows suit with a similar scheme as a pilot. AE very much welcomes such initiatives as they help to create autism-friendly spaces. Meanwhile, its advocacy officer was able to test the “silent hour” on-site in the Brussels region, spearheaded by a Belgian regional deputy.

The Belgian branch of French supermarket chain Carrefour rolled out a “silent hours” scheme on Tuesday in all of their Markets and Hypermarkets across the country. It will run on weekdays from 2 to 4 p.m. Their press release explains that lights will be dimmed and the music will be turned off. Microphones announcements will also be muted. In-store posters inform customers of this new practice. The initiative is part of “Carrefour’s inclusion plan to contribute to a more tolerant world for all”.

Sofie Deparq, spokesperson for AE’s Belgian member association Vlaamse Vereiniging Autisme (VVA) explained Belgian newspaper De Standaard on Tuesday that for autistic people just having to find their way in a shop and having contact with others is a challenge in itself. If other barriers are removed, it is a great help to autistic customers. She welcomed Carrefour’s initiative and the attention paid to this issue. She concluded that it could benefit many people in society, and not only autistic people.

On Wednesday, Belgian supermarket chain Delhaize followed suit. In a supermarket in the Brussels Region, a “silent hour” was piloted from 9 to 10 a.m. A statement released by Karima Ghozzi, spokesperson of Delhaize in Belgium, reads that the “silent hour” is part of a test carried out over 4 week. It will be possible to shop there in a “silent store” for one hour from Monday to Friday. The press release mentions that other stores will join this initiative next week. Delhaize will then evaluate this test and study the possibility of extending this initiative to the vast majority of its supermarkets depending on the technical possibilities. During this “silent hour”, lights are dimmed, music and commercial announcements in the store are absent, the volume of beeps at checkouts is reduced, carts are not moved for storage in the car park and a priority checkout will be reserved for those in need.

Autism-Europe attends the launch of the silent hour in Brussels

AE’s advocacy officer, Christian Takow, who is autistic himself, was invited on Wednesday to test the “silent hour” on-site at the first Delhaize supermarket offering the scheme. As he told Belgian public broadcaster RTBF many autistic people might have issues with lights and sounds which can be particularly difficult for them and stressful. Christian also showed around the Belgian private TV channel RTL Info in the store he visited, pointing to good practice examples such as spotlight adjustments to avoid sensory overload in relation to light.

The silent hour initiative at Delhaize was spearheaded by David Weytsmans, a liberal deputy from the Brussels region parliament who told Brussels regional public television bx1 that he wants to generalize this initiative to all supermarkets in the Belgian capital. For this, a law should be voted on in the coming months, and the Brussels region deputy counts on both the support of the public authorities and private players to guarantee the success of this “silent hours” project.

AE welcomes the multiplication of autism-friendly spaces across Europe

AE welcomes such initiatives, which are now spreading across Europe including the UK, France, and Switzerland. They constitute reasonable accommodation for autistic people and ultimately foster a more accessible society that benefits everyone.

Autism-Europe recently joined an autism association in North Macedonia as well as partners in Malta and Spain to run an Erasmus+ pilot project entitled “Autism-Friendly Spaces” leading to schools being made autism-friendly and stores, cinemas, the food chain McDonald’s, museums, and the country’s airport were certified as autism-friendly in this Southern European island nation.

More informaiton on the « silent hour » in Belgium here :