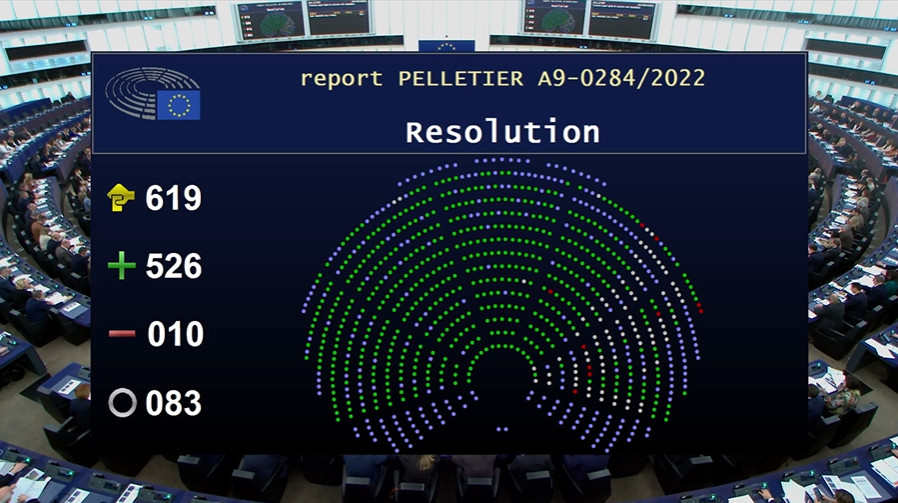 On 13 December 2022, the European Parliament adopted with 526 votes in favour, 10 against, and 83 abstentions the non-binding report “Towards equality for people with disabilities” proposing suggestions to defend the rights of persons with disabilities and tackle discrimination in the European Union. The report was preceded by a debate the day before. At the start of the drafting process back in April 2022, Autism-Europe was able to brief Members of European Parliament (MEPs) on recommendations for people with disabilities including those on the autism spectrum.

The debate on 12 December 2022 took place for an hour in the European Parliament (EP) in Strasbourg, France, and included 28 MEPs from 18 EU countries from all political groups and non-attached members of the European Parliament. Swedish MEP Abir Al-Sahlani commented that despite ideological differences the EP came up with good text making sure people with disabilities are treated with the respect they are entitled to.

The debate was kicked off by rapporteur Anne-Sophie Pelletier from France. To remind the European Parliament of its lack of accessibility, MEP Pelletier tried to deliver her speech in French sign language but was reminded by Vice President Evelyn Regner from Austria, presiding over the debate, to use one of the official languages of the European Union. Continuing her intervention in spoken French, Ms. Pelletier pointed out that she listened to the voices of people with disabilities while writing up her report. She demanded not only international sign but also easy to understand language added as official languages of the EU. Addressing European Commissioner for Equality, Helena Dalli from Malta, directly, she inquired how many people with visible and invisible people are working in the European Union institutions.

Speaking on behalf of the European Parliament’s Committee on Petitions (PETI), MEP Ulrike Müller from Germany, pointed to the aggregating effects of the COVID-19 pandemic on psychosocial disabilities. In her intervention, Commissioner Dalli welcomed the common perspective and commitments as main message to be send to the independent committee currently reviewing the EU’s implementation of the United Nations Convention for the Rights of Persons with Disabilities (UNCRPD).

For an inclusive EU Disability card

Fellow German Member of European Parliament Katrin Langensiepen with a visible disability highlighted she feels her personal freedom of movement is not addressed. Showing the plenary her German disability card, she remarked on its uselessness when taking the bus to the European Parliament in Strasbourg and Brussels. She demanded the EU-wide roll out of the EU Disability Card as soon as possible. Finally, she reminded her audience that people with disabilities do not want charity but that they want human rights – a demand also echoed by Irish MEP Grace O’Sullivan.

MEP Marc Angel from Luxemburg wants the European Disability card to be for multi-purpose use in education, employment and leisure. To make the card inclusive, he demanded adding pictograms and a QR code to highlight that not all disabilities are visible, it is needed for example for first responders. MEP Sirpa Pietikäinen from Finland sees the EU Disability Card as a great start but demands similar obligations for interoperability of mobility for people with disabilities. MEP Milan Brglez from Slovenia pointed to his home countries being one of those where the pilot EU Disability Card is already a reality out and demanded an EU-wide roll out.

Participation in society of children with disabilities and their families

Antonio Maria Rinaldi from Italy and Mislav Kolakušić from Croatia focused on children with disabilities with high support needs. The Italian MEP, father of a son with disabilities, reminded his audience of the needs of parents and carers of minors with disabilities. The Croatian MEP pointed to some autistic children never being able to participate properly in society. Parents of these children are worried, he claimed, how their children will live independently when their parents die.

Stelios Kympouropoulos from Greece, a member of European Parliament in a wheelchair, expressed his satisfaction that he was able to speak for the first time since his election from the front rostrum of the European Parliament, thanks to an accessibility adjustment. He demanded deinsitutionalisation of people with disability and disregarded philanthropy for people with disabilities as charity. MEP Ádám Kósa, a sign language user from Hungary, was, however, still intervening from his seat in the plenary instead of the front rostrum. He demanded better use of innovative technologies to help people with disabilities.

Radan Kanev from Bulgaria, denounced the different financial situations of different EU member states as no reason to spend less money on people with disabilities.

The debate was wrapped up by European Commissioner Helena Dalli reminding the plenary that rights are non-negotiable. Rapporteur Pelletier demanded the full roll out of the EU Disability card by the end of this European Parliament legislative term in 2024 in her final intervention closing the debate.

Read the transcription of the debate in the languages used by MEPs here.

The European Parliament Committee on Civil Liberties, Justice and Home Affairs (LIBE) delegated the drafting of a non-legislative report to MEP Pelletier in January 2022.  Autism-Europe then had the chance to share with Ms Pelletier and her team the needs of people with disabilities incl. those on the autism spectrum during the start of the drafting process back in April 2022. Ms Pelletier had already before the COVID-19 pandemic invited Autism-Europe and other international disability associations for an exchange of view. Furthermore, the team of MEP Müller actively looked for AE’s input when drafting the opinion of the Parliament’s petition committee (PETI). Autism-Europe had an exchange with her assistant as well in April. In November the LIBE committee adopted the report and the European Parliament Committee’s on Employment and Social Affairs (EMPL) as well as the PETI Committee adopted separate opinions. The Committee on Culture and Education sent a letter with their statement.

Find the report adopted here (in all 24 EU official languages)